The Three Types of Conspiracy Theorists

I take a more than average interest in conspiracy theories. Last May, I recorded a video on it that got quite popular, where I explored the archetypal dynamics of this fascinating phenomenon.

In essence, I used my deep familiarity with the psyche and the collective unconscious to reject a lot of conspiracies as psychological projection.

Since then, several of the stories we considered conspiracy theories have been vindicated as true, or at least extremely plausible: E.g. the C-19 Lab Leak theory.

I didn’t expect that, and yet reality is a teacher that shan’t be ignored.

In many ways, it’s been a humbling year.

Recalibrating our sense-making to new information is however a critical capacity that in this culture war era is risky and may come with social, professional and financial consequences.

Here is the crux of the problem: Most of us don’t have the time, energy and resources needed to do adequate sense-making, and so we outsource it to proxies that tend to be highly unreliable.

These proxies – often the media – are flooded with bogus, partisan propaganda, making it extremely challenging to find the red thread of truth.

If that is your situation, I feel with you, for I struggle with this too.

Yet, a remarkable thing is happening: The intentionally deceptive mainstream narratives are starting to destabilize so much that many of you are ready to drop your loyalty to them.

Yet you may be concerned what the consequences will be if you were to honour what you see by becoming congruent in thought, speech and action.

In light of this emerging cultural challenge, I have mapped out the landscape of conspiracy theory in the hope that you may find a path that will lead you towards self-regulation, sanity and service.

I will present in the process the uncomfortable idea that in order to leave conspiracy thinking behind for good, you may have to become someone who is in fact considered a conspiracy theorist.

That idea may turn your mind into a pretzel for now, so let’s dive in and start to tease this apart.

The Three Types of Conspiracy Theorists

These people are often connected to fringe or new age belief systems that have little loyalty to reality.

Due to their attraction to ungrounded and unsubstantiated belief systems, they can suffer from poor psychological regulation, leading to their being flooded by the collective unconscious.

As this happens, they inflate and become grandiose. Their inflation in turn leads them to pursue conspiracies and hidden forces *everywhere*, as they have submerged themselves in symbolic consciousness, by which I mean that they look at the world through symbols, never taking anything they observe at face value.

It is this capacity to ignore what is plain obvious that helps them turn the earth flat and the moon into a big, hollow spaceship. It is this capacity that makes them circle letters and draw lines to conclude that secret messages and satanic symbols are encoded into plain view.

People of the Fringe always pursue a hidden reality, and see patterns everywhere.

The Cult of the Mainstream

These people are the large subset of the mainstream that accepts Scientism as their master, and take their sense-making from the systems that in the 50s taught us tobacco was good for our lungs, in the 70s told us sugar was a healthy nutritional supplement, and in 2020 told us the C-19 lab leak theory was a conspiracy.

For the Cult of the Mainstream, Scientism has replaced God, and outlandish propaganda narratives are gospel to them, as long as they are propagated by someone with the right title to their name.

This unfounded and unquestioned trust in so-called authority makes them suggestible to mind control, and they are easily seduced by hypnotic triggers such as “science has shown”, which can literally shut down their frontal cortex and activate their “yes, master” obedience program.

They do little if any research, and if they do, they pursue sources that spare them of cognitive dissonance and discomfort. Despite this, they often see themselves as rational critical thinkers.

More info on The Cult of the Mainstream

Example: People who uncritically watch mainstream media and believe everything they say there is true.

These people are a rare breed in that they *genuinely* pursue truth. One of their tasks, which they take on as a matter of duty, is hunting for conspiracy theories in the Cult of the Mainstream.

They may or may not have chosen this task consciously, as the calling to pursue Truth is one that often comes to them from a transcendent source.

The Vanguard utilizes rarefied critical thinking skills, network intelligence and cross-referenced sources in a completely non-partisan, non-ideological way. Truth is their Master, and they have rejected the God of Scientism.

The Vanguard pursues truth in a genuine way, and often does so at the risk of their personal comfort. They show little loyalty to normative sense-making narratives, for they have eyes to see the substrate of such narratives, recognizing their frequently deceptive nature. When proven wrong, members of The Vanguard gracefully change their mind, always eager to align with Truth.

The Vanguard is not genuinely a group of conspiracy theorists, but they are often considered as such by The Cult of the Mainstream, who cannot differentiate it from The Fringe.

Relationships between the three groups

Folks in The Fringe have very tense and tenuous relationships with members of The Cult of the Mainstream, who they see as lost, and potentially evil. They may feel affinity with The Vanguard, though may judge them for not being sufficiently “red pilled” or for being “too normal”.

Cult of the Mainstream

Folks in The Cult of the Mainstream easily dismiss The Fringe as dangerous tinfoilers. But when faced with The Vanguard, they struggle with cognitive dissonance.

The Vanguard is a mystery to The Cult of the Mainstream, as it’s typically comprised of people whom they respect.

But members of the Cult of the Mainstream may eventually choose to reject members of The Vanguard, as failing to do so creates intolerable cognitive dissonance in their respective worldviews.

This choice will likely have long-term consequences for them, as that cognitive dissonance will embed itself in their unconscious, where their sense-making will now literally go to war on itself.

By consequence, they may begin to psychologically fragment, with the risk of gradual onset of fear, paranoia, and ultimately group psychosis.

While members of The Vanguard know that members of The Fringe have lost their way, they may at times come to view them as people who have entered the mouth of madness, where they are privy to useful non-ordinary information that sounds crazy to most people.

However, the idea of entering “crazy time” has been widely recognized by indigenous cultures as a mark of shamanism, and The Vanguard thus knows to not dismiss The Fringe out of hand as having nothing of value to share, as they may indeed have “been to the other side” and returned information from the archetypal unconscious.

The Vanguard knows The Cult of the Mainstream is largely unable to differentiate them from The Fringe, and their loyalty to Truth empowers them to carry that burden.

At their best, members of The Vanguard look at The Cult of the Mainstream with compassion and understanding, even though its members may literally attack them for their beliefs. And while that may sound impressively Christ-like, members of The Vanguard are fallible and flawed people who may struggle with feelings of fear, resentment, anger, loss, and loneliness.

People in The Vanguard carry a unique dilemma: How can they demonstrate a higher road of Truth and Love to members of the Cult of the Mainstream, without simultaneously being discarded as Fringe crackpots?

Which type are you?

Now, the question remains – are you a conspiracy theorist? And if so, what kind?

I know from experience that the only group of conspiracy theorists that will hold a strong adverse reaction to this article is the Cult of the Mainstream, as members are so strongly wedded to the identity of being a sensible and “normal” person.

So if at this point, you feel triggered from what you have read, you are likely a member of the Cult of the Mainstream. This realization, I will confess, is by design.

If you now recognize this, know that it’s okay – we’ve all been there (myself included), and you have every opportunity to decondition yourself from the Cult.

If you KNOW you have left the Cult of the Mainstream, however, but are unclear if you belong to The Fringe or The Vanguard, this is the litmus test: The Fringe WANTS their conspiracies to come true. They feed them through grandiosity and feel that once their dystopian world emerges, they will be vindicated as truth-tellers who now deserve to be loved.

Members of The Vanguard pray they’re wrong, for the consequences of being right are devastating.

This is all in my estimation of course, and written with the best data and analysis I currently have. It is not objective truth, but the best sense-making currently available to me.

I wish for our organization to be a Vanguard organization, and am working to ensure that my team and I never drop into The Fringe or The Cult of The Mainstream. I have limited influence over this as long as our core value remains sovereignty and self-responsibility, yet it remains important to me.

But when I see the courage and journalism of a man like Glenn Greenwald, I get so inspired, and identify a few key behaviours that I also aim to live by:

If you are ready to take those behaviours on while also becoming congruent with your own innate natural essence, you will truly be a servant of the more beautiful world.

It isn’t easy, but in times such as these, it is very important indeed.

And ultimately, what I want you to leave this article with, is that the large majority of conspiracy theorists are those of the Cult of the Mainstream, not e.g. tinfoil flat earthers or people who believe politicians harvest immortality juice from babies.

No, simply normal people who are not aware of the extent to which they are lead astray by false narratives.

You need to know that because when you start to become a true critical thinker who pursues actual science and not scientism, the Cult of the Mainstream will disapprove of this and may see you as a conspiratorial member of The Fringe.

Yet this is the price humans have always paid for being members of the perennial Vanguard.

And for better or worse, the process of joining the Vanguard will slay you again and again, and the more identity you construct around it, the less you’ll be able to embody its associated behaviours.

And while it is a challenging path to take on, the heightened connection to new friends and allies, yourself, and even the divine more than make up for it. 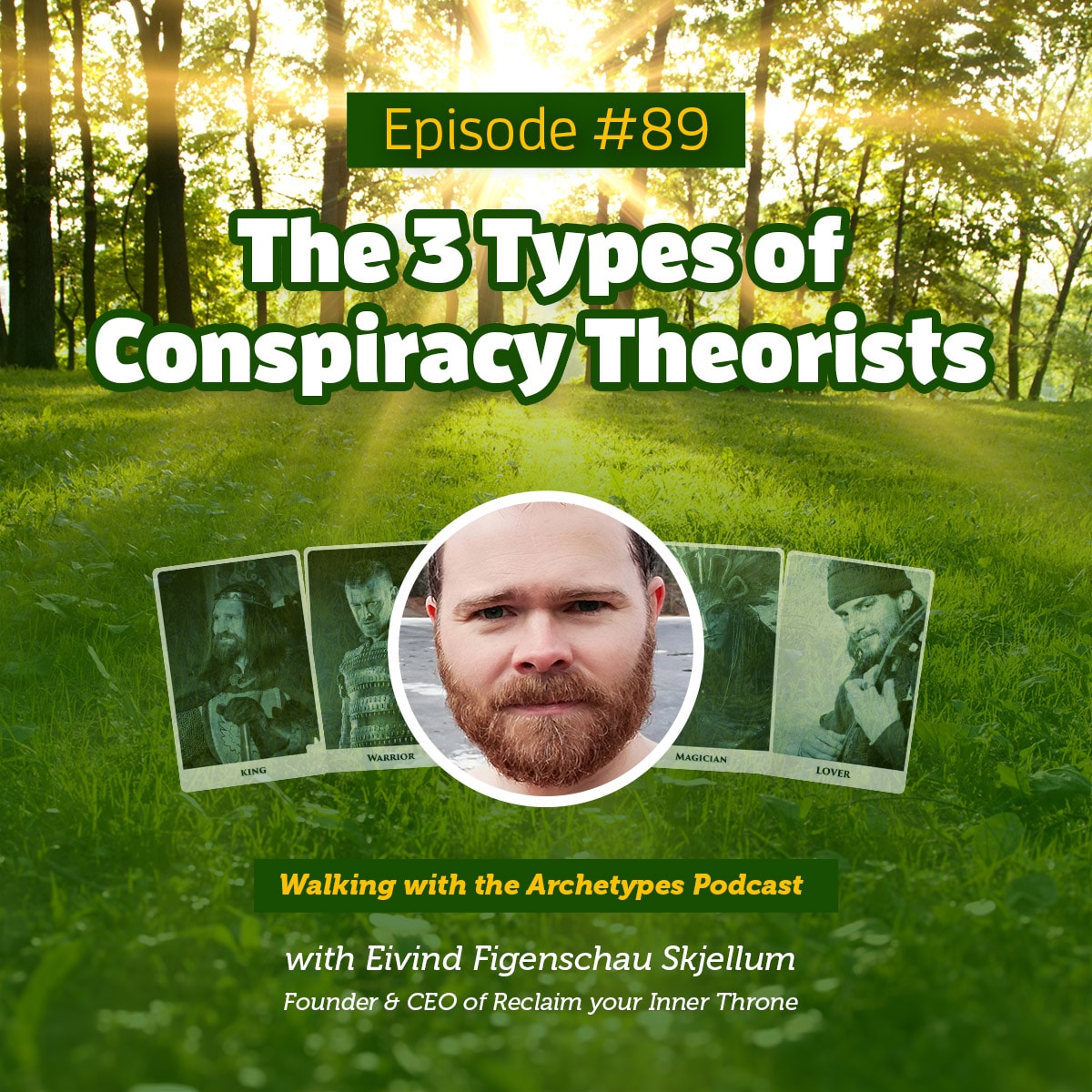 I’ve also covered this theme on the Walking with the Archetypes podcast.

You are welcome to listen to episode #89 today.