The Archetypal Message of Christmas

As I attended the traditional Church service this Tuesday, singing psalms and carols that have been in my life since I was a wee boy, I was struck by how strongly the mythological narrative of Christmas mirrors the psychological work of reclaiming your Inner Throne.

The deepening of that recognition, aside from sending a couple of tears down my cheek, had me inquire further into the keys to sovereignty provided in the story of the birth of Jesus.

In a time where a pervasive sense of meaning and hopelessness claims increasing numbers of people – and especially the young – it seems important to renew and uplevel our understanding of our culture’s rituals and transformational narratives, shifting from mere faith to real understanding of the teachings and insights which are intrinsic to them.

Let’s now discover these teachings, as they are presented to us through the Nativity of Jesus, and apply them as a map to your 21st century sovereignty.

Since time immemorial, myths have served as vehicles for teaching and identity formation at every level of the human experience.

They are the core meaning-making devices of any culture, operating at deeper levels of the human experience than both religion and science.

Carl Jung’s remarkable discovery was that world mythology features roughly the same characters and narratives across cultures that had no contact with each other, and that they correspond with the transformational symbols and characters from dreams and psychotic breaks.

The repetition in myriad forms of the selfsame symbols, in both the external and internal worlds, is evidence, he suggested, that the human psyche is patterned from the very deepest levels up.

The symbols and patterns that recurred, typically represented anthropomorphically, he named archetypes, and our myths are the stage on which their stories are told.

In the work of the late Dr. Robert Moore & colleague Douglas Gillette, the human storyline, just as in the myth of Christmas, starts with the birth of the Divine Child.

Then the human journey continues, through the unknown territory of life, with different archetypes activating at different stages (download my book Where Peasants become Kings for a more complete introduction to the system).

Were you to fulfill your human potential in this lifetime, Brother, you would be enacting – in your own unique ways – the mythic “Return of the King”, seen in Christianity as well as Tolkien’s The Lord of the Rings, arguably the most highly treasured work of fiction to date.

For the King archetype is the central archetype of the psyche, the crowning glory of a man’s life on this earth, and the one around which the world is made anew.

To say that these reflections are reminiscent of the story of the Nativity of the Christ is an understatement.

Jesus of Nazareth is born as a Divine Child into a world which has lost its way. His coming is heralded by angels, and his radiance draws the attention of shepherds, magi, and even the animals unto him. Even before having language, he is celebrated as the new King.

Though with such fame comes negative attention, and soon enough the tyrant King Herod hears of the newborn King and orders the Bethlehem infanticide. Baby Jesus lives, and goes on to experience his own hero’s journey (mysteriously absent from scripture) in order to fully embody his divine potential as the resurrected Son of God.

The exoteric (outer) interpretation of the myth of the Christ is that the Messiah, as King and Redeemer, has liberated humanity – through his selfless sacrifice – from sin, and given us eternal life. The esoteric (inner) interpretation is that a template of how to step into our most transcendent human potentials has been given to us, and that it involves a process of death from the ordinary and rebirth into the extraordinary.

Further clues as to the contents of this template can be found in Matthew 18:3, where Jesus suggests that the Kingdom of God will only open to us when we “become like little Children”.

But what does that actually mean?

Does it mean to become naive and irresponsible, wanting people to take care of us?

Of course not. Jesus, I believe, is speaking symbolically (he isn’t asking us to step into his regression shrink-ray) and suggests that we must embrace the innocence and wonder of a little child as part of our adult experience if the most transcendent aspect of reality is to open up to us.

This becoming like little Children seems to point to an innocence similar to the beginner’s mind the Zen masters speak of. Perhaps it means something like the capacity to let go of attachments, and seeing the world anew in every moment. If so, this capacity helps us remain unguarded, as we feel increasingly at home in life.

It appears that when we embrace our innocence, letting go of needless defenses that once took the color out of life, we become friendly with Creation itself (alluded to by the animals gathering around Jesus’ crib). As that happens, the Kingdom of Heaven appears already here.

Most of us err on this note, however.

Due to the ignorance of our culture, the typical experience of men like you and I, Brother, is to repress our innocence in an effort to be powerful. Like King Herod did with Jesus, we attempt to kill off our innocence so that we can remain strong, leaving us instead fragmented, defensive, dried up and unhappy.

The unfortunate truth is that when we attempt to kill off the Divine Child in us, as most of us do, we become tyrant “King Herods” by default.

Though in this era of male domestication, for most of us this tyranny is turned inwards, as punitive and scolding inner voices. In response to this inner tyrant (Shadow King), whole parts of us shut down, go rigid, clench, in an effort to follow his command. Our inner Kingdom withers.

As we pursue this futile and painful path, we perpetuate our culture’s tradition of exiling our sweetest, most beautiful parts to places in the Underworld where the sun never shines. And our worthiness, sense of belonging and trust in a benevolent universe all go out the window.

We Fall from Grace. 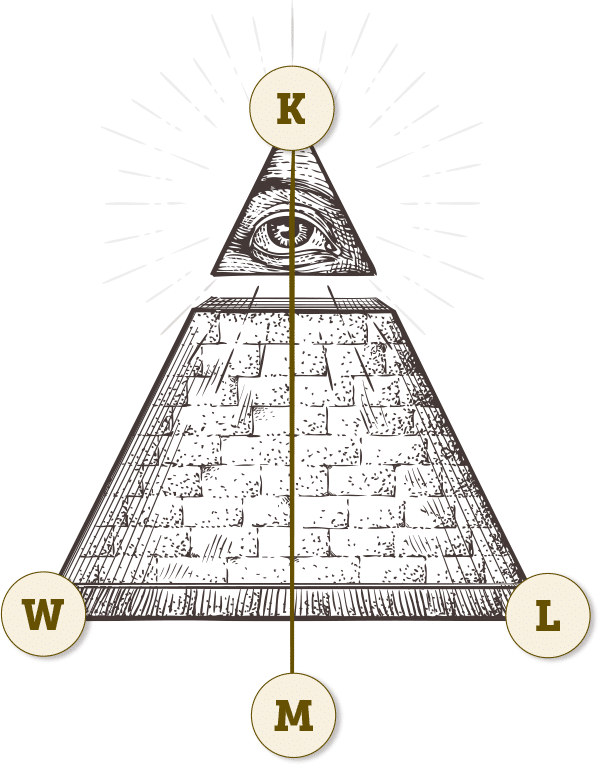 Fig. 1
K = King: At the top, representing Vision, Blessing, Closeness to the Divine.
M = Magician: In the Underworld, shines his light of Awareness into the dark places to find and reclaim exiles (your power, sexuality etc). Then travels up the vertical axis to welcome them into the King’s royal court (“your power is welcome”, “your sexuality is beautiful” etc)
W = Warrior: Power, aggression, boundaries etc.
L = Lover: Intimacy, relationship, sensitivity etc

Leaving Christmas for a moment, in the teachings of the Individuation Matrix (fig 1), we can see how we need to activate the Magician archetype in order to travel to the Underworld to reclaim our inner exiles.

These exiles are generally connected to the Lover and Warrior sectors of the psyche, which means themes such as intimacy/sexuality/community (Lover) and power/boundaries/courage (Warrior).

As the Magician part of us reclaims these exiles, in a narrative related to Jesus’s descent into the Underworld, we climb the vertical axis of Wholeness and Integration towards sovereignty.

In Matthew 5:5, Jesus claims that “the meek shall inherit the earth”. Just like with Matthew 18:3, these words may easily be misinterpreted to mean that weakness will be rewarded. But going to the Greek roots of the work “meek”, we come to understand that the word meek refers to a power that is tempered by sensitivity.

In other words, meekness is a concept that corresponds with what we in Reclaim your Inner Throne call bridging the Warrior and Lover archetypes. (This work of learning to be powerful with heart is at the core of the work we do for the men of the world.)

Returning to Christmas, the enduring power of this myth* reminds us of the tremendous pull the archetypal narrative of the Divine Child turned King exerts on us.

It is so enduring because it reflects an inner reality, which to summarize looks something like this: The Divine Child is born with the Kingdom of Heaven still alive in him. But childhood is a journey that ends with a transition into adulthood, and adulthood is defined by a mandatory Fall from Grace (in the sense that you lose your “intimacy with God”).

I believe that this Fall, seen through the lens of mythic interpretation, speaks to the emergence of the human ego. As we develop our separate self-sense at around 1-3 years of age, I discover how I am separate from you. And then, suddenly, the world becomes a competitive arena with finite resources. Our oneness with Creation/the Kingdom of Heaven is lost.

This Fall from Grace is not optional, as without it, we become helpless as adults. But were we never to continue our journey from exile back home, to a re-embrace of our innocence, we will live out painful lives on this planet, the doors to the Kingdom of Heaven forever closed.

When we aspire to undo the Fall from Grace to return to our source, we are welcoming the Divine Child back home.

As the New Year approaches, I wish for you that you stop, as have so many men on their Reclaim your Inner Throne initiation over the years, enacting the infanticide of King Herod. Let go of misguided attempts to be strong  by posturing and pretending, and start instead to develop a real strength, with the enormous power of the Divine Child’s connection to the “Kingdom of Heaven” as its reactor core.

As you do so, you will find that your exiles start returning home, as your inner world becomes healed and wholed. Were scripture accurate, and on this point I trust that it is, the Kingdom of Heaven will be opened to you, and you will inherit the earth, as a returned King.

May it be so, Brother.

NB! The last training of Reclaim your Inner Throne Phase #1, where we show you how to do this, starts March 23, with only a few seats remaining. For more information, go here.

* It’s incorrect to interpret myth as a falsehood or a lie, even though that interpretation is now the most common. A myth, in essence, is a story about the world that holds inherent truths about life and reality. You could say they convey “meta-truth”, which on some level is more true than a factual truth, as they represent deeper observations about patterns of life. From a mythical reading, whether Jesus Christ was a historic figure or not is insignificant, for the truths of the stories are independent of it.